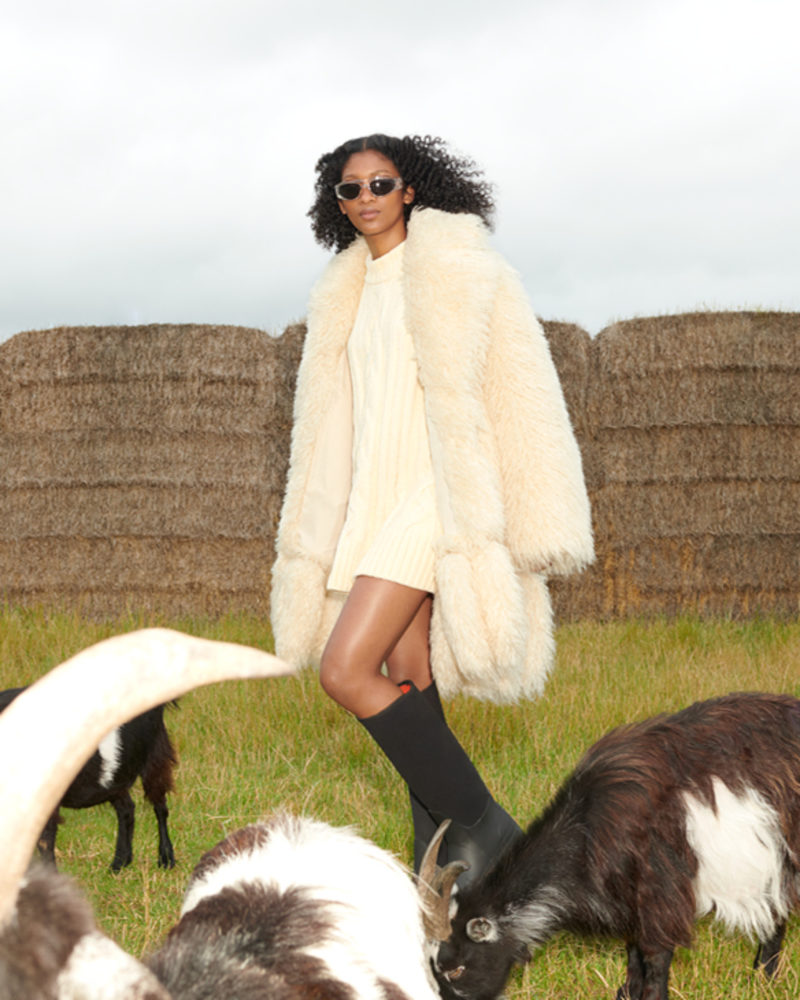 It’s a step in the right direction, but past controversies call this sustainability pact into question.

H&M’s recent sustainability push has earned the fast fashion retailer some moderate praise, and now it’s got the stamp of approval from People for the Ethical Treatment of Animals, or PETA. We know what you’re thinking: “Fast fashion” and “sustainability” in the same sentence reads like an oxymoron. But the global retailer has made legitimate strides towards eco-friendly clothing alternatives. In recent years, it has banned the use of fur, angora and exotic animal skins in its clothing, and does not accept wool from farms that use mulesing, a controversial practice of removing sheeps’ wool-bearing skin. In 2020, the Swedish brand topped the Fashion Revolution Transparency Index as the most transparent fashion company on policies like animal welfare, biodiversity, living wages, gender equality and supply chains, winning out against 250 fashion and apparel brands across the world. Most recently, in September 2021, the brand launched H&M Rewear, a resale platform where customers can buy and sell items from any brand, in an effort to adhere to the growing demand for circularity in fashion.

And on October 26, the retailer announced a new collection in partnership with PETA. The line, Co-exist Story, is the third installment of H&M’s Innovation Stories, a series of collections focused on sustainability. It marks the first time a fast fashion brand has been approved by the nonprofit organization, reports WWD.

The campaign for the collection, launching online and in select stores on November 4, is set at a wildlife sanctuary. Models decked out in the collection feed and pet farm animals. Pieces are made with vegan alternatives, including FLWRDWN (a substitute for animal down made with wildflowers) and vegan leather Vegea, also known as wine leather, made from grape skins. The term “vegan leather” can sometimes be misleading, as some brands still use hazardous chemicals for the leather tanning process, which can harm the planet and leather workers. Vegea leather, however, is made using vegetable tanning, thus making it more sustainable compared to plastic-based alternatives. The collection boasts more innovative forms of sustainability and “animal friendly” materials, with some items featuring the phrase “Speak Up For Animals.”

The Co-exist Story collection is a testament to H&M’s efforts to be more sustainable, but as a fast fashion company, its practices inherently involve overproduction and waste. And although the collection is a step in the right direction, both PETA and H&M haven’t exactly been symbols of sustainability.

H&M is the world’s second largest fast-fashion brand, just behind Inditex, the parent company of Zara. It offers thousands of new items every week, and operates under a business model that encourages the quick rotation of fashion trends and perpetual purchasing of new garments. According to Good on You, an organization that assesses and rates the ethics and sustainability practices of fashion brands, H&M cannot be considered sustainable because of its business model. In September 2020, Good on You assessed H&M’s environmental impacts, labour conditions and animal welfare, and gave it a mediocre rating of three out of five. “At the end of the day, H&M is still very much a part of the unsustainable fast fashion industry,” stated the organization in its assessment. “Its promotion of ‘disposable’ fashion and constant rotations of new trends and products has a huge environmental impact. An increasing amount of cheap clothing ends up in landfill after a few wears due to these reasons.”

PETA states that every piece in the Co-exist Story collection is certified PETA-Approved Vegan. But the animal rights group has its own history of not-so ethical practices worth noting. In the past, PETA has been called out for disrespecting communities by equating the mistreatment of animals to the oppression of marginalized groups. PETA has been accused of fat-shaming, sexism, ableism, and making racist remarks, all supposedly in the name of animal advocacy. And despite the organization’s outspoken activism, PETA itself has been accused of animal cruelty. Over the years, there have been reports of high rates of euthanasia at PETA’s animal shelters in Norfolk, Virginia, where the nonprofit is headquartered. Earlier this year, Lexology reported that, in 2020, PETA’s shelter death rate still outpaced the average rate at which other shelters in Virginia euthanize animals. Nevertheless, the organization says it “opposes speciesism, a human-supremacist worldview,” and its motto reads, in part, that “animals are not ours to wear.”

“The ‘Co-Exist Story’ collection epitomises our ongoing commitment at H&M to exploring innovative alternatives to animal-derived fabrics while still offering our customers cutting-edge fashion,” says Ann-Sofie Johansson, creative advisor at H&M, in a statement. “H&M and PETA have enjoyed a positive dialogue throughout the project, and we are proud to support the valuable work that PETA is doing every day.”

While it may not be the perfect model of sustainability, H&M’s decision to introduce a fully vegan line to its fast fashion model brings affordability to those unable to buy more expensive, fully sustainable brands. And (controversies aside) in releasing a vegan collection, H&M is not only increasing awareness of vegan alternatives but also making them more accessible for shoppers with less money to spend.