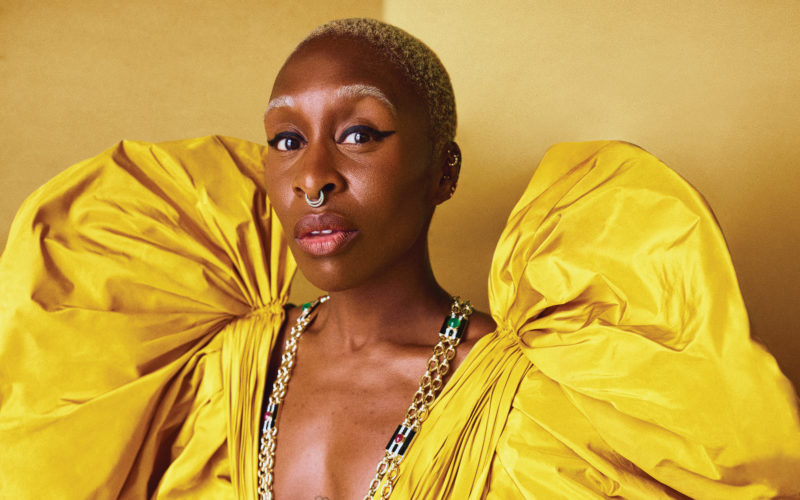 Erivo’s fearless style has consistently landed her on best-dressed lists. And with her debut album, she bravely shares some personal pain.

While the pandemic has waylaid the best of plans, Cynthia Erivo has risen to make the most of it. When I connect with the Grammy- and Tony-winning actor, singer and producer via Zoom in late August, she is in L.A. and sounds exceptionally at ease for someone on the brink of a monumental month. Erivo’s September started with jury duty at the 78th Venice International Film Festival and a rapid-fire round of breathtaking fashion moments, including one Schiaparelli Haute Couture number in which she seemed to be encircled by silver foil.

And then there was her Emmy nomination for her portrayal of Aretha Franklin in Genius: Aretha and the release of her first children’s book, Remember to Dream, Ebere, which paints the tale of a young girl encouraged by her mother to shoot for the stars. But the main event, and an actual dream come true, was the release of Erivo’s debut solo album, Ch. 1 Vs. 1, which she used as an autobiographical vehicle. “I wanted to tell a story about my life and for people to get to know me as a person,” she says

Until now, the world has come to know Cynthia Erivo through her powerful portrayal of fictional characters and real-life icons set to a soundtrack. Born and raised in London, England, she became one to watch in 2015 when her lead role as Celie in the Oprah production of The Color Purple dominated Broadway and she won a Tony Award. In 2020, playing abolitionist Harriet Tubman in Harriet earned her Best Actress nominations at the Golden Globe, Screen Actors Guild and Academy awards, where she brought the house down with her performance of “Stand Up” — the film’s Oscar-nominated song, which she co-wrote. But an album of her own work was always the plan.

“Music was a huge part of my childhood,” she says. “My mom would play music in the house every weekend when she was tidying up, whenever she cooked and when we’d go to school.” With exposure to an array of artists and eras, from Annie Lennox to Boney M. and Diana Ross to Lauryn Hill, Erivo credits her mom’s eclectic taste as a guiding source. “I was listening to everything,” she says. Ch. 1 Vs. 1, an emotional journey of 12 tracks that Erivo co-wrote, is the culmination of it all.

From the uplifting bop “The Good” to the soulful melody of “Hero,” her touching lyrics infuse every song. “If one person hears this and realizes that they’re not on their own, that they’ve experienced things that I have, then that’s my job done,” she says. Exposing the intimate pain and hurt of her fractured relationship with her father, who disowned her when she was 16 years old, “You’re Not Here” was the most challenging song to write. But it’s her first solo venture, and she has enjoyed accomplishing the creative task with autonomy. “What I write about, how I sing it, which key I decide to sing it in, whether I make it a two- or five-minute song—it’s all very much in my hands,” says Erivo. “This is not the case when it comes to other forms of expression, whether it be onstage on Broadway or being in a film saying other people’s words.”

Professionally it’s Erivo’s job to embody other people, but personally she’s very comfortable in her own skin and her fashion choices. Serving fearless looks has consistently landed her on best-dressed lists. “I’ve had really wonderful moments, and I blame it on my stylist, Jason Bolden,” she says. “He understands what I want, how I want to see myself, and he also understands that I’m not afraid, so we really have fun playing with pieces”—which makes choosing a personal favourite impossible. “I can’t pick just one; that’s really difficult,” says Erivo, noting standouts such as the beautiful crystal-embellished white Versace ball gown she wore for the 2020 Academy Awards and the neon-green Valentino with a Jetsons vibe that she appeared in for this year’s Golden Globes. A gold-and-silver sequined Louis Vuitton column dress that “looked like it was made for Nefertiti” chosen for the 2021 Grammys and a glittering off-the-shoulder Thom Browne dress from 2020 round out her list. “It looked like a tuxedo and was the most classic shape you could think of. That was one of my all-time favourites,” she says of the latter.

Growing into her style, Erivo says that one detail has remained consistent. “I love heels—that has never changed,” she enthuses. “For me, the crazier the heel, the stranger the shape, the better. And that’s sort of where it started.” She also credits her love of vintage shopping, born out of necessity when she was an up-and-coming star, as a developmental force. “That is what really helped me out when I was new and didn’t have anything to wear,” she says. “I don’t know if I had very much style when I was younger. I was a confident kid and put on whatever I felt was right for me.”

Self-adornment is another essential instrument in Erivo’s self-confidence tool kit. “There’s this wonderful thing for Black people that is part of our history and our legacy—it’s adorning and dressing the body in a way that allows people to see its regality,” she says. “That’s something that has always been in my head.” Erivo started getting piercings when she was in her teens and now has a number of them (the tally on her ears is 23) as well as tattoos. “It has become a part of who I am and how I present myself to the world,” she says. “I really love it.” Her latest addition, a septum ring, was acquired thanks to the now-or-never vibe of the pandemic we’ve all felt at some point. “You know when you’re like ‘Life is too short: Get the thing you want to get’? So, I got it,” she says. “Now I have a ridiculous collection of septum jewellery.”

Her practice of self-expression extends to her elongated fingertips. During our chat, she describes her present nail art as “black-and-white snakeskin coming through lava.” A fan of a soft-almond-stiletto nail shape, Erivo first fell in love with how her hands looked with long nails after her godmother took her to a salon when she was 16. “I was really obsessed with Barbra Streisand—I still am—and her hands are always manicured,” she says. “Even when she played Yentl, her fingers were manicured.” Over the years, Erivo has enjoyed collaborating with nail artists to maximize the tiny canvas. “It’s been a way to tell a story,” she explains. “Sometimes I have little hidden codes or pictures that people may not realize are in there”—such as her mustsee manicure she had done for the 2018 Met Gala that was inspired by the work of Harmonia Rosales, an Afro-Cuban-American artist who reimagines classical masterpieces featuring Black women.

Amid the glam, Erivo also makes a point to pepper her Instagram stories with grit, like her preference to start the day with movement. “Working out is like meditation—I need it,” she says. “It’s what centres me, and I feel good afterwards; I’m always chasing the endorphin rush.” In contrast to the airbrushed facades that many celebs share, Erivo doesn’t shy away from posting a sweaty barefaced selfie.

“There’s a strange pattern of showing perfection and a weird pressure that is put on people who don’t look like that when they’re working out,” she says. “When I work out properly, I absolutely sweat. I want people to see there is a reality that we all go through and it’s not a bad thing—it means it’s working.” Erivo is currently focused on training for the New York City marathon in early November, and her weekly routine includes full-body workouts and yoga or Pilates. Her best advice for surviving long-distance running? “Good sleep, good shoes and hydrate all day.” On the trail or off, those wise words would take anyone far.

Quick Ab Workout for Women Over 50
【Apple】He calls my lunches gross and feeds them to his coworker to “dispose” of them… But then…
Fitness Yoga Tips 2023!!🔥🔥
Dorian Who Releases a Thought-Provoking Collection + More Fashion News
Yoga Poses Relieve Gas? | POPSUGAR Fitness