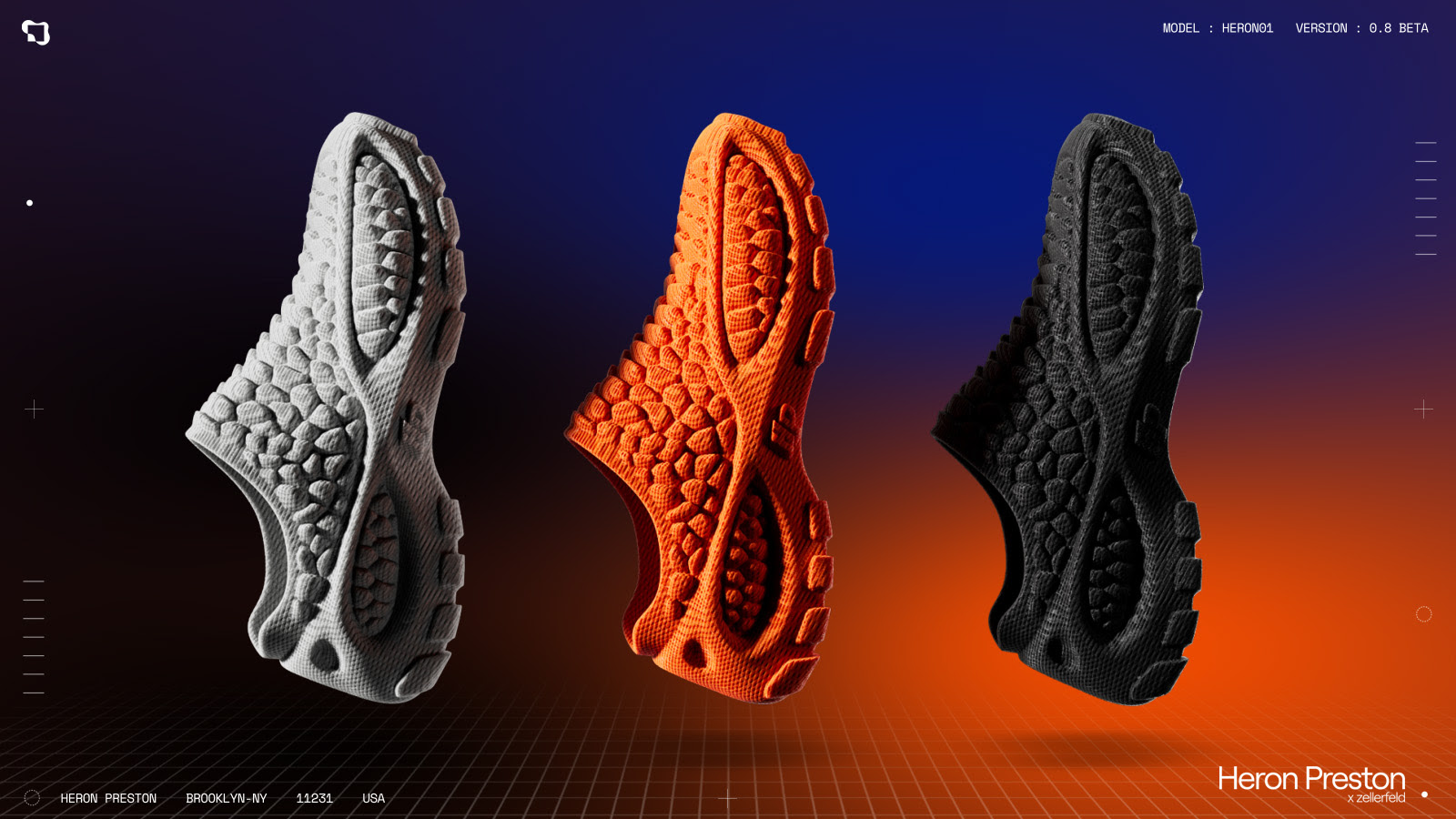 Is this the future of footwear?

Designer Heron Preston has released a fully 3D-printed sneaker in collaboration with technology company Zellerfeld, the first of its kind available to the public. And suddenly, the bar for footwear everywhere has been raised to offer a sustainable and forward-thinking alternative in an industry known for its excessive waste production.

NY-based Heron Preston is no stranger to innovative fashion. The Instagram-famous creator, who debuted his namesake label in 2017, has collaborated with designers such as Kanye West and Virgil Abloh and has worked on sustainability-focused projects in the past. After seeing a 3D-shoe prototype designed by emerging tech company Zellerfeld, Preston was inspired by the prospect of rethinking traditional footwear.

Introducing HERON01, a 3D-printed sneaker inspired by nature, and produced without factories or supply chains. Abandoning traditional modes of construction, the HERON01 was created using a process more similar to software design than traditional shoe design, says the Heron Preston brand in an official release. The virtual design process allowed for concepts to grow and evolve quickly, with functional prototypes created in a matter of hours — something that would typically take months to do. Throughout the process, designer Heron Preston and Zellerfeld CEO Cornelius Schmitt never actually met in person. Instead, they worked alongside each other digitally, mainly through WhatsApp conversations.

The HERON01 is futuristic in look and build. Made without seams or stitching, and free of toxic glues and materials, the sneaker is entirely recyclable and incorporates circularity to its production model. Zellerfeld recycles the sneakers that customers send back in a “closed loop system” that uses the material of old shoes to create new, reimagined footwear.

The look of shoe takes inspiration from the Heron bird, with elements that mimic the impression of the bird’s claw print. The avant-garde sneaker was developed in collaboration with London-based footwear designer Mr. Bailey, who is known for his futuristic designs. With low ankle cutouts and a chunky sole, the shoe is wearable and easy to slip on, keeping to Heron Preston’s signature workwear-inspired designs. HERON01 ups the ante on sizing accuracy, too, by offering a custom fit for any shoe size with the use of an iPhone foot scan.

The digitally produced shoe is representative of Heron Preston as a post-internet designer, as well as the growing digitization of the fashion industry. Due to the Covid-19 pandemic, fashion has largely been forced into the digital realm, and brands like Heron Preston are utilizing this shift in their own work. In October 2020, womenswear brand Khaite debuted its SS21 collection via 3D renderings on guests’ phones, all of who were viewing the show remotely. And in May 2020, contemporary brand Hanifa live-streamed its latest collection with a runway show made up entirely of 3D “ghost” models. Athletic brand Adidas has also experimented with digitally produced sneakers, using 3D-printed firm carbon as the midsole for their 4DFWD running shoe.

But Heron Preston’s fully 3D-printed shoe signifies a new step in the blending of the fashion and digital worlds. The collaboration between the creator and Zellerfeld fuses design with innovative technology — resulting in what may be the future of fashion. “The HERON01 is just the beginning — with additive manufacturing, the potential is unlimited,” says Preston. “I can’t wait to print more shoes and updates.”

The HERON01 will debut on StockX as part of a “Campaign for a Cause.” Between October 5 and 8, hopeful buyers can enter to win a pair of HERON01 by making a donation of $10 USD — proceeds go toward Global March, a charity fighting child labour in supply chains. Winners will also be given access to Zellerfeld’s Beta Program, where worn shoes can be traded in, reprinted and updated. Starting October 5, shoes will be available on StockX, and a limited release planned for Zellerfeld’s website.