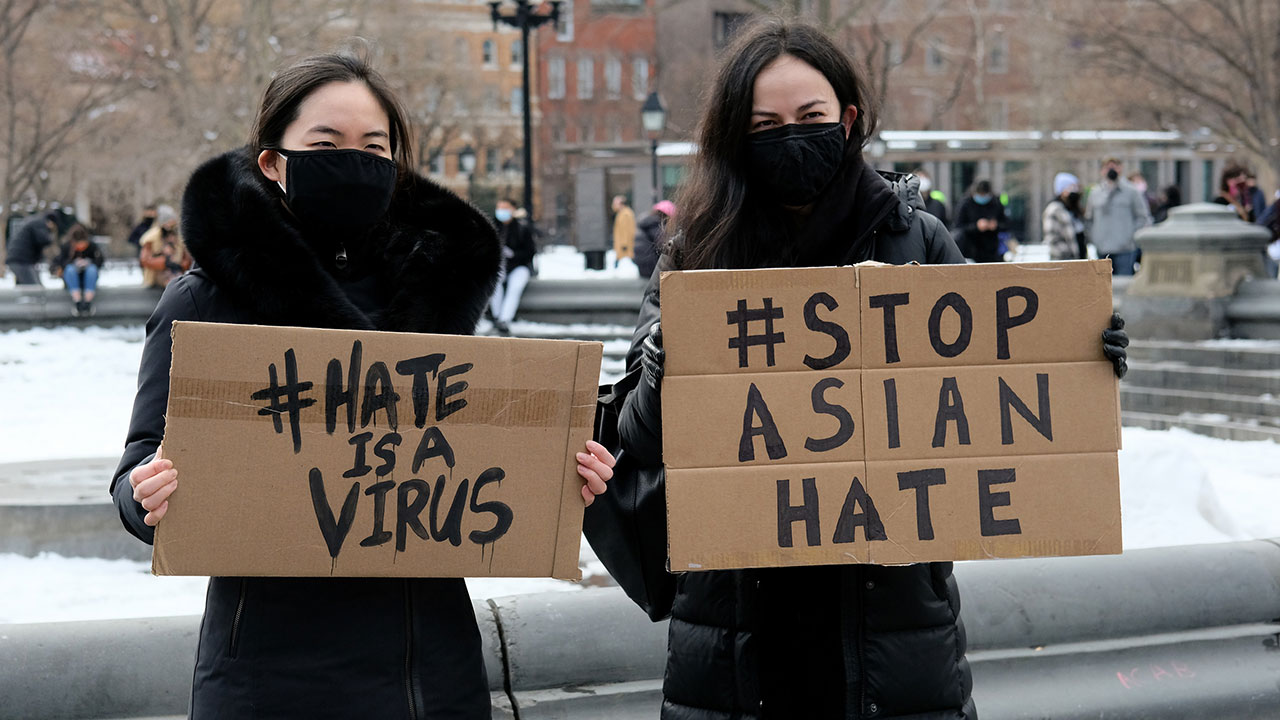 The March 16 Atlanta shootings have galvanized the already-growing movement. Here’s what to know—and what you can do to help.

On March 16, a series of shootings within a single hour at three massage parlours in Atlanta, Georgia left eight people dead, including six Asian women. At the time this was published, only the names of those killed in the first attack have been released. They include Xiaojie Tan, 49; Daoyou Feng, 44; Delaina Ashley Yaun Gonzalez, 33; and Paul Andre Michels, 54. Elcias R. Hernandez-Ortiz, 30, sustained non-life-threatening injuries.

Robert Aaron Long, 21, was charged with murder and assault the following day. Although police have not yet labelled the shootings a hate crime, they have said that Long may have had a “sexual addiction” and was targeting places of “temptation.”

For Asian-American and Asian-Canadian communities, however, there is no other way to describe the latest attack in a year that has seen anti-Asian hate crimes rise dramatically since the COVID-19 pandemic began. Here’s what you need to know—and how you can help.

How much has anti-Asian racism increased?

When COVID-19 became a household term almost exactly a year ago, then-U.S. President Donald Trump labelled it “China’s fault” and the “China virus.” Since then, not only has the virus been called various racist names, there has also been a rise in racially charged incidents in the west—and online.

According to an October 2020 report by the Anti-Defamation League, there was an 85 percent increase in anti-Asian rhetoric and conspiracy theories on Twitter shortly after Trump used those terms during the first presidential debate in the fall.

In the U.S., Stop AAPI Hate, which tracks hate crimes against Asian-Americans and Pacific Islanders, released research on March 16 revealing that nearly 3,800 incidents were reported from March 2020 to February 2021. Notably, women made 68 percent of the reports compared to men, who made 29 percent, while 6.2 percent were made by people 60 years and older. In fact, there has been a rise in attacks on elderly Asian Americans in the U.S., with over 20 cases reported in just the last month in northern California alone.

What does #StopAsianHate signify?

After news of the Atlanta shootings began to circulate, so, too, did the hashtag “#StopAsianHate.” The hope, say many activists, is that this viral movement will shine a light on the racism that existed well before the pandemic and is even more prominent in the U.S. today.

That goes for Canadians, too. Jooyoung Lee, associate professor of sociology at the University of Toronto, explains to FLARE: “I hope this wakes people up from multicultural myth-making where Canadians fall in love with the narrative of this country being a very open and tolerant society.”

In amplifying the conversation, the goal, too, is that others will become enlightened as to just how deep this history of hurt and “vicarious trauma,” in Lee’s words, runs.

“A lot of people are expressing how this is reopening traumatic wounds that Asian folks in different places have experienced. It reminds us of everyday microaggressions that we deal [with], it reminds us of overt racism, it reminds us of violence,” says Lee, who grew up 30 minutes from where the shootings took place and says, as the child of Korean immigrants, it struck especially hard learning that some of the victims were Korean women. “It reminds me, it reminds us, of all of these things that we sometimes gloss over because narratives about racism against Asians are overlooked a lot.”

He says a key reason why anti-Asian racism can sometimes go unnoticed is because of the model minority myth, which suggests that some Asians have, in Lee’s words, “transcended the problems and ills” that continue to affect other racial minority groups. In that sense, #StopAsianHate has also offered a platform on social media for many to share what their experiences with racism have been, and how they have left long-standing scars.

Madelyn Chung, a Toronto-based writer, psychotherapist, founder of the RepresentASIAN Project and frequent FLARE contributor, says she feels numb as she continues to process the news and is reminded of her own experiences with racism.

“One time I went to a bar and there was a guy there with a shirt that said ‘I heart Asians.’ When I came in, all of his friends pushed me over and wanted me to take a picture with him as if I were a token,” she recalls, an uneasiness wavering through her voice even now. Growing up in a predominantly white neighbourhood, she says she has been thinking a lot about what she put up with and felt she couldn’t speak up about at the time.

“If I did, I was deemed too sensitive by those around me. I think about that when I think about these women who had to put up with this on a daily basis while trying to make a living,” Chung says about the spa employees who were murdered on March 16. “Meanwhile, you wait for the rhetoric that will be used by the media and may not be accurate, and the excuses that will be made for this man, which is often the case when the person committing these violent acts is a white person. I’m angry that my timeline is filled with his face.”

Were the Atlanta shootings racially motivated?

Some have felt confusion as to what exactly these shootings were motivated by if not racism, after police have said it is “still early” to label it a hate crime, and because Long claimed it was not racially motivated. Many, however, feel there is no question that the killer’s motive was rooted in racism, and have been sharing as much through the #StopAsianHate hashtag.

Georgia state representative Bee Nguyen said in a statement that those who were killed appear to be victims of the “intersection of gender-based violence, misogyny and xenophobia.” Context, in other words, is important.

And, says Lee, “People are often uncomfortable with the label of racist even if they are openly racist. And we have to get away from thinking that it’s definitely an outright act of white supremacy or of an incel. We like convenient labels, but in reality, a lot of these ideas are interwoven. We have to take what he said with a grain of salt and realize that this kind of stuff is very complex and these identities intersect.”

In other words, despite what Long himself believes, his crimes may indeed be racially motivated because a perpetrator doesn’t need to label themselves as racist for it to be true.

Will this latest tragedy lead to change?

When it comes to seeing actual systemic and societal change from this and last year’s racial reckonings—which includes the Black Lives Matter movement—a few key things need to happen. First and foremost, education.

Lee says when he grew up in the U.S., he didn’t learn about the Asian civil rights movement or the major historical events that galvanized it. The same goes for young Canadians.

“There’s so much that we’ve got to do and it starts with education,” he says. “Now, in the interim, it is about informing  the public on how they can intervene as a bystander when it comes to racially-motivated incidents.”

She encourages using the internet not only as a resource to enlighten, but to listen, support and amplify others who are sharing their experiences right now.

“It’s important to recognize that you are not alone, this is not okay, and it’s not something you have to put up with as a person of colour or as a woman,” Chung says, adding that a key learning lesson for her has been to always speak up. “I struggle a lot with guilt for feeling the way I feel about these attacks. ’Am I speaking out too much? Am I being overly sensitive? Am I allowed to feel these feelings?’ Yes, I am, we should be angry, we should be able to express our hurt and grief.”

What has been strongly echoed through the #StopAsianHate movement is that this is not a time for performing support, but for real action. In other words, that means doing more than posting a black square on Instagram; it means making space for diversity in workspaces, collecting data on race and minority groups during the pandemic and after, adopting a diverse lens when consuming media—and so much more.

How can you help?

Not only does allyship look like intervening as a bystander, as Lee said, or educating yourself on anti-Asian racism, as Chung noted, but you can also put your money where your mouth is.

The Toronto-based Butterfly SW is a support network for Asian and migrant sex workers and massage parlour workers; you can sign its petition of solidarity here and donate here. You can also contribute to Maggie’s Toronto Sex Worker Action Project here, or SWAN Vancouver, which offers culturally specialized support for immigrant women engaging in sex work.

To educate yourself on the history of anti-Asian racism, what it means to unpack white privilege and food justice, visit the Vancouver-based non-profit Hua Foundation. There, you can also find ways to contribute to the Chinatown Cares Grocery Delivery Program. You can also learn more about Chung’s own RepresentASIAN Project—which celebrates, advocates and elevates Asian representation in various fields—here.

Other organizations, including the Chinese Canadian National Council – For Social Justice, also provide information on how to engage and advocate for racial equity and justice.