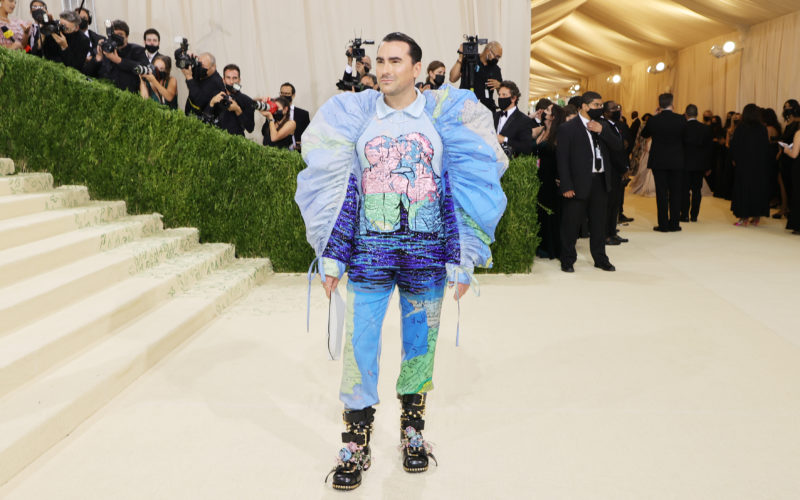 Read on for a quick lesson in LGBTQ+ history, straight from the Met Gala red carpet.

Since the coveted return of the Met Gala on September 13, the internet is still buzzing about how guests interpreted and executed this year’s theme of “In America: A Lexicon of Fashion.”  Some outfit designs had spelled-out messages (literally), like congresswoman Alexandria Ocasio-Cortez who wore a gown by Canadian designer Aurora James with the words “Tax the Rich” splashed on the back. Or model Cara Delevingne who sported a Dior power suit that featured the statement “Peg the Patriarchy.” (That phrase that was reportedly first coined by Toronto-based designer Luna Matatas and used without her consent …yikes). Other attendees, however, came donning designs that had more imaginative meanings. Queer history is an inseparable part of America, and fortunately, many LGBTQ+ guests used that to inspire them on the Met Gala red carpet.

There was no shortage of queer excellence at this year’s Met Gala, from Lil Nas X pulling off three— yes, three ​​— shimmering Versace looks that he said symbolized his coming out process, to Canadian actor and Gossip Girl reboot star Jordan Alexander turning heads in a multicoloured dress that Teen Vogue noted was inspired by the LGBTQ+ flag. But among our favourite queer-inspired outfits were the historically rich ensembles sported by Dan Levy, Nikkie de Lager and Elliot Page. These guests went a step further with symbolic nods to LGBTQ+ culture that had us Googling queer historical figures all night. Read on for the breakdown of what those looks represented.

The always-fashionable Schitt’s Creek co-creator debuted an absolutely show-stopping ensemble by Spanish fashion house Loewe. The Canadian actor and writer wore a button-up shirt with over-the-top puffy sleeves that featured a world map design. At the centre of his shirt was an outline of two men kissing while standing amid a shimmering water pattern. Not only was the outfit hand-embroidered, but it’s also full of historical significance. The design pays tribute to the late David Wojnarowicz, an American artist and AIDS activist. Wojnarowicz’s art was inspired by his struggle with AIDS, and Levy’s Met Gala look specifically paid homage to his 1984 piece “Fuck You Faggot Fucker,” a powerful reclamation of homophobic language and symbols.

In January 2020, YouTuber Nikkie de Jager (known as Nikkie Tutorials) came out as transgender, revealing that she had been blackmailed and coerced out of the closet. The tactic of blackmail against LGBTQ+ people is sadly nothing new — it has been used throughout history to intimidate and endanger queer people. But at this year’s Met Gala, de Jager channelled American LGBTQ+ icon Marsha P. Johnson, a Black trans liberation activist who was at the forefront of the 1969 Stonewall riots in New York City. The flower crown and matching tulle gown was a nod to Johnson’s famous headpiece. According to Johnson, the “P” in her name stood for “pay it no mind,” and this phrase was printed on a sash flowing down the front of de Jager’s dress.

The Canadian actor, who came out as a transgender and non-binary person in 2020, wore a classic black Balenciaga suit with a simple green carnation pinned on — an emblem of queer history. The flower seemingly channelled Oscar Wilde, an Irish poet from the late 19th century who was jailed for being gay. At a time when openly sharing your sexuality could lead to extreme social punishment, Wilde and his followers wore green carnations, and though its meaning was never explicitly confirmed by Wilde, the green carnation hinted at queerness. The flower became a secret identifier for gay men and a subtle yet powerful historical symbol.

Now that’s how you do a Met Gala theme. For the comprehensive list of all our fave looks from the 2021 Met Gala, click here.

Tips For New Yoga Teachers
3 Cheap Post Workout 💪Meals (NO WHEY PROTEIN!! ❌) #shorts #youtubeshorts
A Dangerous Fungal Infection Is Spreading Across the US. How Concerned Should We Be?
Why Levi’s 501 Is Still the Most Iconic Pair of Jeans
Fertility Yoga for Egg Quality | Yoga for the Follicular Phase and Preparing for Egg Retrieval