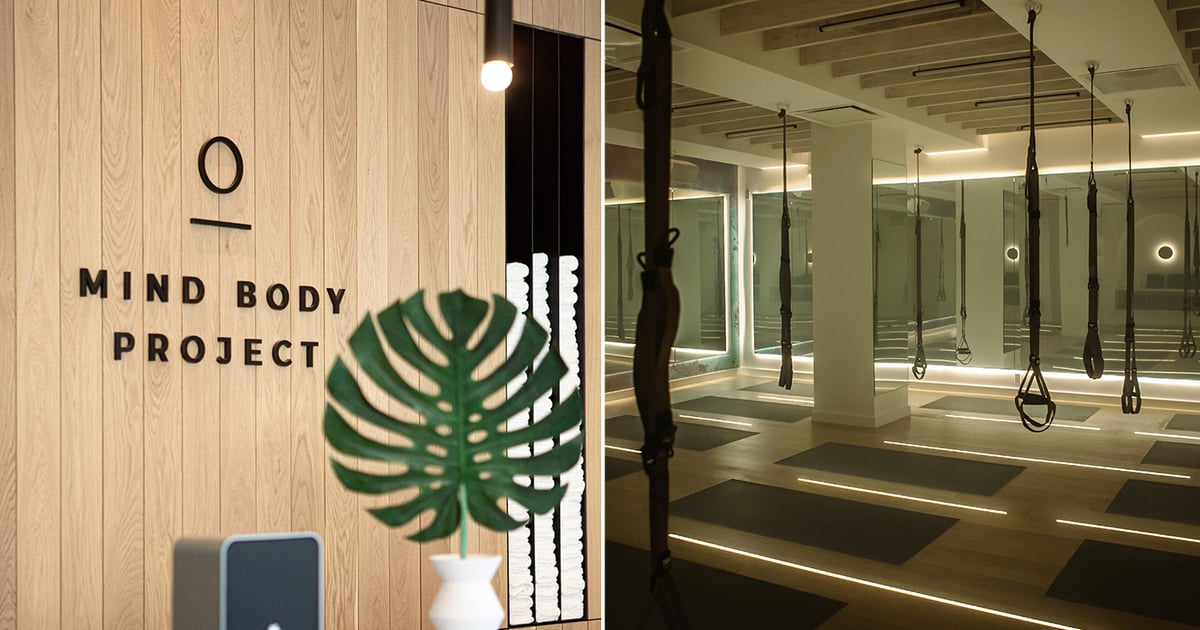 As someone who has take nearly every type of HIIT class in New York, I was curious to see what made HIIT at Mind Body Project so different. The class format consists of a five-minute meditation, a 40-minute HIIT workout, and closes with another five-minute meditation. In an open letter, founder and CEO Chris Stockel wrote that he created Mind Body Project to combine “meditation and fitness to help others in the various profound ways” that HIIT and meditation have helped him with processing stress from overthinking and anxiety.

Using this sandwich-style format, the initial meditation sets the tone for class, readying participants minds for the workout portion. The HIIT pulls everyone’s attention into their workout in a way that prevents them from focusing on anything other than where they are in the moment. With the second meditation bringing the workout full-circle by reinforcing the idea set at the top of class.

I was invited to take a 50-minute press-only class to experience this unique combination of HIIT and meditation for myself.

Walking into the studio felt like walking into a spa. The serene surroundings of wood, marble, foliage, and netted lounge area all seemed so comforting and relaxing. But I knew I wasn’t there to relax. A butt-kicking workout was on the horizon.

Entering the classroom space, the layout looked just like the image above, only we had a circular meditation cushion and towel already placed on our mats along with the mat below and the TRX ropes hanging above.

Getting ready for the first meditation we had the choice of sitting upright or lying down, and I chose to lie down putting the circular cushion under my head and neck. Our instructor Andrew Samuels then began to guide us through three deep breaths before taking us through a five-minute meditation about community. In speaking about community, he mentioned that all of us entering one space to move together was already a form of community that we were participating in and that we were there to support one another in the space.

Mind Body Project is truly a place where people can come together to work out while building an honest communicative community.

We began class with a cardio heavy warmup, which included a few rounds of jumping jacks that made me glad I took my inhaler before class. Then we dove right into the workout. The start of class consisted of some moves you’d often do in a HIIT class (like high knees and squats) but the TRX portion was the part that really piqued my interest.

Just like when I tried aerial yoga, I had to take a moment to gain trust with the TRX by pulling on it to make sure that it could hold my weight. Once that trust was established, I was able to lean into the series of movements which consisted of push-ups and pull-ups.

Using the TRX for this series felt great in my body because, for the push-ups, I could feel my body stabilizing to complete each rep without feeling like my hips were falling out of alignment with my ribcage. Having my body in an upright-ish position gave me a better sense of center. As for the pull-ups, we had to recline about 45 degrees then bring ourselves up with our elbows by our sides. This motion was my personal favorite as I felt the most comfortable doing it. My whole body felt the most stable as I pulled myself up and slowly lowered back to the starting position.

Once we bid farewell to the TRX, it was time to get low to the ground and use another prop, our meditation bolster, for core work. Holding onto the bolster we did Russian twists, ball pass (but with a bolster), and more core-burning moves.

Towards the end of the HIIT class, we did beast to frogger. For my body, it’s hard for me to firmly plant my hands and jump so far forward that my feet land outside my hands, so normally I use a step or blocks to bring the ground closer to me. With neither of those within reach, I grabbed for the next best thing, the bolster. Planting my hands on the bolster gave me enough height and stability to complete the exercise and the HIIT portion of class successfully.

Lying down for the second mediation, I placed the cushion draped in a towel under my sweaty head and gently closed my eyes in relief. As Samuels circled back on the theme of community, one of his comments surprised me in the best way. He brought up his whiteness and awareness of his privilege as a white man. He continued to speak about the need for self awareness and education on BIPOC injustice that needs to come from white people in order to bring systemic justice.

I highlight this because in fitness classes, the idea of coming together as a community are often spoken about but rarely get specific enough to speak on distinct types of injustice. Samuels’s comments made the space feel as if it wasn’t just another HIIT class that threw in meditation but that Mind Body Project is truly a place where people can come together to work out while building an honest communicative community.

How to Tell When You’re Actually Ovulating
Quick Ab Workout for Women Over 50
8 MIN LEG WORKOUT – with Lucas & Steve / Level: Beginner – Medium, or use it as a Warm Up
Arms Workout For Women – Standing Moves – No Equipment – Bodyweight | Wrist Friendly #womensworkout
The Truth About ADHD & Exercise (and the Hardest Barriers we Face)