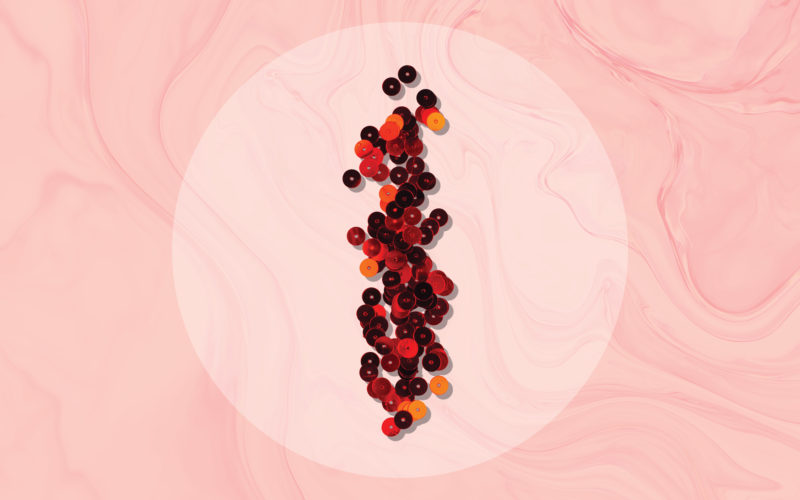 Periods don’t have to bring our sex lives to a halt. In fact, getting busy while menstruating has benefits.

I’ve never had sex on my period on purpose. There are only two circumstances in which this would’ve occurred — by accident, or at the bitter end of my cycle when I couldn’t wait to get it in. Two halves of my brain fight against each other when it comes to period sex: The part that is a raging feminist and wants to smear my endometrial lining on any man who dares cross my path, and another part that feels ashamed I even bleed at all.

I grew up in the ’90s and got my first period at 13. Periods were a dirty secret — I didn’t tell my mom or my friends for a year when I got mine. I hated it and the constant reminder from *gestures vaguely* society that I was dirty. At school, we were discouraged from even mentioning it outside of sex ed class and at the time, many public washrooms weren’t even equipped with pad or tampon dispensers. We used passive terms for it like “Aunt Flo” or “monthly visitor” instead of calling it what it is. Pads are commonly called sanitary napkins when nothing is unsanitary about them at all. Now 30 years old, I still refer to my period as “Shark Week” to help ease the tension of discussing periods with my sexual partners. They always laugh, so, mission accomplished?

Rachael Newton, the founder of period-care brand Nixit, wants to change that.

She first got the idea of creating a sustainable period product while living abroad on an island, and noticing just how much waste she was producing from tampons and pads alone. But while shopping for a menstrual cup, sifting through confusing information from some leading brands and chatting with friends about their period troubles, she finally decided to design one of her own.

It took three years for the Nixit menstrual cup to come to fruition. The brand’s silicone cup, unlike tampons and other leading period cups, doesn’t use absorption or suction to stay in place. Instead, it uses gravity and our bodies own unique natural forms to sit comfortably in place. It’s super light, ultra flexible body leans against the pubic bone and vaginal fornix, higher up that most other products that sit at the base of the cervix in the vaginal canal, like a diaphragm. The material is thinner, lighter and more pliable, and the lack of suction allows for comfortable movement and shifting into the perfect position for you. And because it doesn’t use suction, it’s actually a lot easier to insert and remove; while it sits higher, it’s easier to reach and take out with your fingertips — no awkward pinching and tugging required.

And yes, it’s perfect for period sex. Unlike other menstrual cups, Nixit sits higher up in the vaginal canal, not only reducing the amount of blood that can leak during sex, but also actually allowing for more comfortable penetration while it’s inserted.

Orgasming during your period can help relieve menstrual pain

“Some people are totally comfortable with [period sex], and that’s fine for them,” Newton says. “But for a lot of people [who aren’t comfortable with it], it opens up the conversation because they’re like, ‘I’ve got this product [and] it doesn’t matter that I have my period.’”

There are many reasons people may want to have sex on their periods, she explains. For some, their sex drive runs high while menstruating. And furthermore, orgasms can help with relieving cramps.

Research shows that having sex on your period can relieve cramping pain thanks to the oxytocin and endorphins released after orgasm. Research by former professor and author Beverly Whipple found that women’s pain tolerance and detection increased by 74.6 and 106.7 percent respectively after orgasm.

Additionally, for those who experience pain during intercourse, period blood can act as extra lubricant during penetration, thereby increasing pleasure — for both parties.

Beth* grew up knowing her period was a secret, encouraged by her mother to stay quiet about it and always feeling awkward bringing it up with partners. As she matured, being able to have sex on her period became an important part of her life and relationship with her partner, who’s always been open to learning.

Using Nixit has allowed Beth the freedom to not have to plan around her period, but rather make it a part of her life — a move that’s helped improve her sexual confidence tenfold.

“When I used a menstrual cup previously, I found it difficult to get excited about sex because planning around my complex menstrual cycle started to become a burden,” she says. “Using Nixit as a means of having mess-free period sex … gave me flexibility to have sex whenever I want.”

On the other hand, when Stephanie* got her first period, her family took her out for dinner to celebrate.

“My parents never told me to hide it or not talk about it, and definitely never mentioned it was dirty” she says. The most she was concerned about was smelling bad in high school, but periods were never an issue when it came to having sex.

“If sex was initiated, I would just say, ‘By the way, I have my period right now,’” she says. “It’s never been an issue. The usual reaction from a partner was, ‘let’s get a dark towel or try the bathroom counter, to avoid making too much of a mess.’” Now, “if we’re in the mood, it’s a non-issue,” she adds.

Millie* grew up in a period-friendly household; her grandfather was even a gynaecologist. But because her friends weren’t as vocal about periods, she didn’t talk about it as much. The more comfortable she got with her body, the easier it became.

“In the beginning, I only ever mentioned my period as a ‘warning’ before sex,” she says. “As I become more comfortable with my sexuality and my partners, it would become a more open conversation.”

“What’s most important to me is that my partner respects my body … That includes not shaming me for something that’s natural to my body.”

At the end of the day, being able to enjoy our bodies on or off our periods is paramount to building a positive relationship to our own beings — whether it’s sex with ourselves or sex with our partners, or exploring our bodies through using period cups.

*Names have been changed at the source’s request.

【Apple】He calls my lunches gross and feeds them to his coworker to “dispose” of them… But then…
We’re in the Age of Experimental Eyebrows
The Truth About ADHD & Exercise (and the Hardest Barriers we Face)
After My Mom Got Shot, It Took Years For Me to Understand That I Was a Survivor, Too
[ASMR] SOLO Camping | Healthy Meals | ทำอาหารคลีนๆ อยู่ง่ายๆ สัก 2 วัน 1 คืน || Ep.58