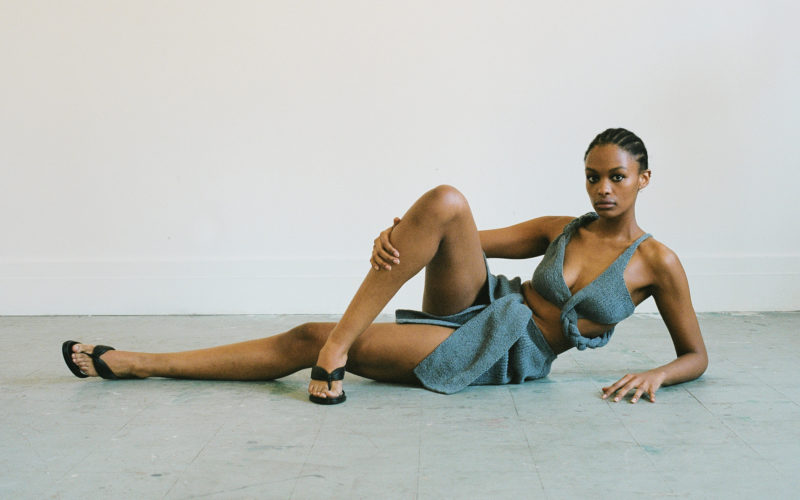 The Canadian designer on how he turned the COVID-19 lockdown into an opportunity for creative exploration.

Like many people, Vejas Kruszewski learned to knit during the pandemic. But he worked with yarn made from recycled post-consumer denim, so his results are unique.

Making the most of it

Since 2016, when he became the youngest winner ever of the prestigious LVMH Special Prize, Canadian creative Vejas Kruszewski has been riding a wave of international attention for his architecturally-off-kilter pieces. For several years, the design phenom ran his eponymous brand out of Paris. Then came COVID-19. Unable to renew his work visa, Kruszewski found himself stuck in Canada initially sans sewing machine but with plenty of time on his hands. “I learned how to knit,” he says. “It was quite an experience and something I normally wouldn’t have had time for. I spent a lot of hours watching The Crown and a National Geographic series called Mars while practising.”

Self-care — but make it fashion

Kruszewski’s pieces may have a complex structure, but they recall laid-back inspirations — “sexy, lazy beach vibes,” as he describes them. “The skirt is in the shape of a towel wrapped around the waist, and the bra is like braided hair,” he says. The contented and ritualistic feelings captured relate to how Kruszewski has approached design this past year. “It feels so good to work with my hands and to share that work with others. That’s what keeps me going.”

Once the prototypes were developed for his knits, Kruszewski sent them to be made at a factory in Italy’s Veneto region in limited quantities. “I started collaborating with this factory in 2020 and am working with one of the sons — it’s a family business,” he notes. “It’s so nice to work with someone of my generation and who has similar sensibilities, which is not so common.” Speaking of uniqueness, Kruszewski explains that the yarn used was “created from recycled post-consumer denim in Prato, Italy — an area long recognized for its textile-recycling knowledge. Old jeans were shredded, and a new fibre, with a unique marled texture, was produced.”

My 30kg Routine To Lose Weight – What I Ate In A Day, Workout Routine & Staying Motivated
The BEST way to start your day! | 10-Minute Morning Yoga
#healthy #lunch inspo 🥦🥕🍊für einen gesunde Start ins Jahr #lunchtime #healthylifestyle
After My Mom Got Shot, It Took Years For Me to Understand That I Was a Survivor, Too
ASMR | What I Eat In A Week [Healthy Lunches]