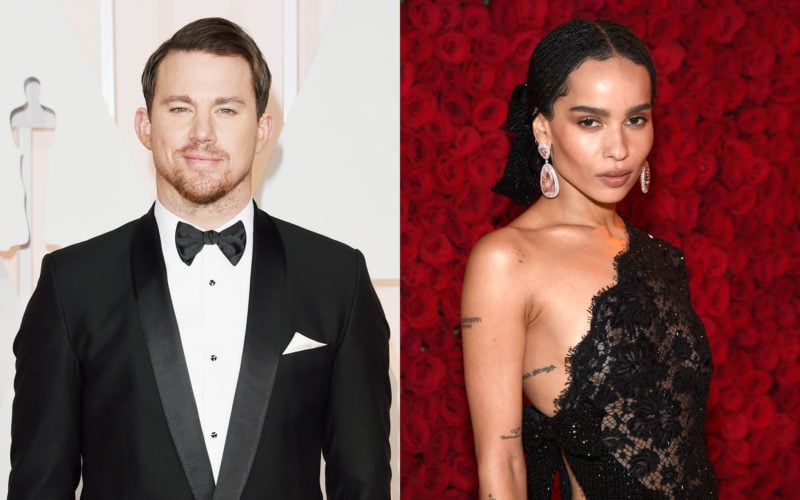 We interrupt your internet browsing with some very important news: Channing Tatum and Zoë Kravitz might be an item. It’s the coupling that we never knew we needed — so let’s discuss.

It all started on August 18, when the pair were spotted on an outing in NYC. Tatum is seen riding a black BMX bike with Kravitz walking next to him. At one point, she even hopped on the back of the bike to ride along, which is objectively adorable. The snaps quickly prompted the internet to beg the question: are they or aren’t they together?

One of the hints pointing towards the former is Tatum’s apparent change of style in the presence of Kravitz, who is known for her elevated sense of fashion. During his early 2000s acting era of playing jock-like characters (think: Step Up and She’s The Man), Tatum was often seen sporting low wasted jeans and tight tank tops (or, no shirt at all). Now, he seems to have adopted an effortlessly cool, grunge style of well-worn graphic tees, straight-legged jeans and Converse that vibes with Kravitz’s own polished but laidback brand of street style quite well. Could it be the Zoë Kravitz effect? Fans think yes. Earlier this year, Deadline reported that she gave Tatum fashion advice, telling him to stop wearing Crocs because he couldn’t pull them off. We respect the brutal honesty — especially when it comes to questionable fashion choices.

The duo has been spending more time together lately because of work. Tatum was handpicked by Kravitz to star in her directorial film debut, Pussy Island — which we know will be great, because duh.

Following their Manhattan bike moment, the actors were spotted on yet another NYC stroll on August 19. This time, they were holding ice coffees and laughing together. Kravitz, wearing a minimal Araks blue slip dress, walked alongside Tatum in a white graphic tee and faded blue jeans, with another BMX bike in tow (seemingly a staple accessory of his new wardrobe). Something about them just says power couple, no?

The dating speculations come eight months after Kravitz filed for divorce from actor Karl Glusmam, and as of now, neither Tatum or Kravitz have confirmed or denied the status of their relationship. However, a source told E! News that they have recently gotten closer and that their relationship has grown beyond a friendship. Interesting…

Romantic involvement aside, the two make an *excellent* pair, and their street style inspo is the real gift here. Keep it coming, guys!