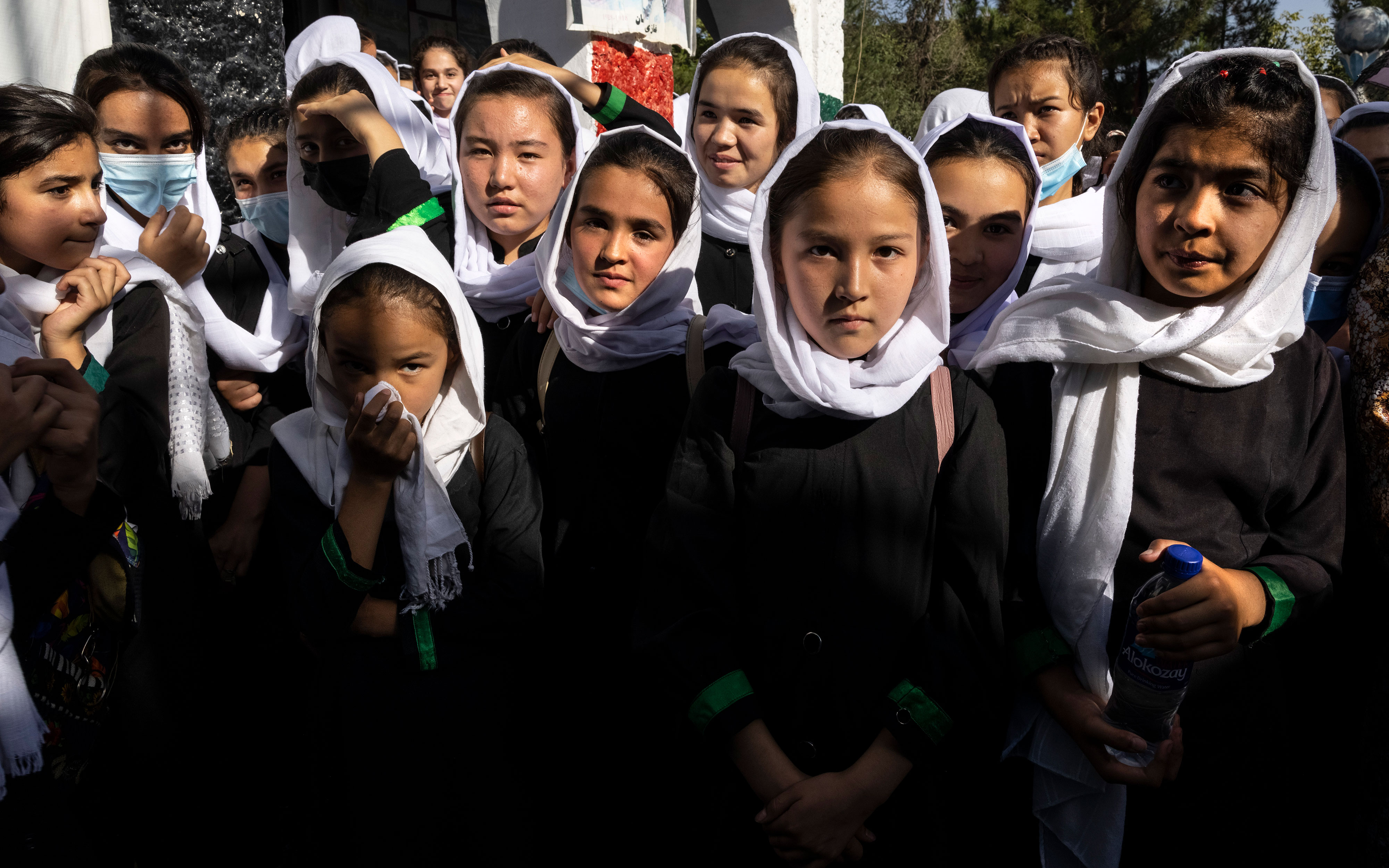 Here’s what the Taliban takeover could mean for women’s rights in the country — and how you can help.

When the Taliban first took control of Afghanistan in 1996, Murwarid Ziayee was a university student at Kabul University. Studying law and political science, she took her education seriously and was always the first to arrive in class. One morning, toward the end of her final year, she woke up to the news that the Islamist militant group had taken over the streets of Kabul, the nation’s capital city. The Taliban was not allowing anyone to leave their houses or go to school, and she remembers feeling disbelief. She decided to go out anyway because a classmate had borrowed her notebook and she needed it back to study. “[I was] fully covered: the whole hijab from top to toe in black. I also covered my eyes,” Ziayee says, adding that she didn’t know much about the Taliban or how they treated women.

Soon after leaving her house, Ziayee was stopped and questioned by two men, who she later realized were members of the Taliban. They asked her why she wasn’t wearing a burka (a traditional modesty veil that drapes over the head and down to the ankles), why she was not accompanied by a man, and what she was doing walking on the street. Then, they got violent. “They lashed at my back twice, and I ran,” she recalls. “I saw a taxi driver stop for me, and I just got into the taxi and was crying the whole time. The taxi driver said, ‘I saw those men lash you and I felt so bad. I’m sorry I couldn’t do anything for you, but I can take you home.’” She cried for days after that.

The Taliban retained power in the country for the next five years, meaning Ziayee and women all over Afghanistan were denied education, employment, and the right to leave their homes without a male guardian. She spent those years working for a Pakistan-based NGO, travelling around the country with her father to secretly provide humanitarian assistance to Afghan women. After the World Trade Center terror attacks on September 11, 2001, the U.S. invaded Afghanistan and ousted the Taliban from power. Once the Taliban was displaced, Afghanistan experienced what Ziayee describes as a revolution. Over the next few years, women worked, studied and were active in society because they were excited about rebuilding a new country. Things were changing for women in Afghanistan. “We were moving towards a really progressive life,” she says. “Until last week.”

On August 15, the Taliban regained control of Kabul — solidifying its rule over the country for the first time in nearly two decades. The group had been reclaiming control of Afghan cities since May 2021 when U.S. forces began to withdraw from the country. As Taliban militants closed in on Kabul, the country’s president, Ashraf Ghani, fled. Without military resistance, the Taliban was able to swiftly take over the country. In their advance toward the capital, militants destroyed medical facilities, killed civilians, and displaced thousands of Afghans. They also sent some women home from their jobs, telling them not to return.

The Taliban’s occupation of Kabul marks the end of America’s longest war, which began when the country invaded Afghanistan after the September 11, 2001, terror attacks. But the U.S. had been involved in Afghanistan since before then. In 1979, Afghanistan was invaded by the now-dissolved Soviet Union, which wanted to prop up the communist government in the country during the Cold War. After the Soviets invaded, the anti-communist sentiments among the population led to the formation of Afghan rebel groups, called mujahideen, who were supported by the U.S. Once the Soviets pulled out of Afghanistan, a civil war ensued between mujahideen groups. The U.S. backing and arming rebel groups during this war between the Afghan government and Afghan rebels generated a breeding ground for what has become the Taliban. Zaiyee says that during the U.S. presence in Afghanistan from 2001 to now, not only were U.S. forces unable to shut down the Taliban, but they saw the forming of new terrorist groups within the country. Currently, there are over 20 active terrorist groups in Afghanistan, including Al-Qaeda, that are suspected of being allied with the Taliban. The country ranked first on the global terrorism index in 2020.

Zaiyee moved from Afghanistan to Canada in 2018, and currently works as the senior director of Canadian Women for Women in Afghanistan (​​CW4WAfghan), a non-profit organization that implements different educational projects, such as teacher training and literacy studies, for women in Afghanistan. After years of pushing for Afghan women’s rights, seeing the Taliban come to power feels like a nightmare, says Zaiyee. “Women are back living an indoor life [and] an uncertain future. Not only are our rights at risk this time, but our lives are, too,” she says. “We were so proud of the progress we made, and the achievements we gained, not [only] in our lives, but also for the whole country [and] for the new generation. And to see that has been taken away from us or it will be taken away from us — this is the most painful moment of my life.”

When the Taliban held power from 1996 to 2001, they established a reputation for their violent governing tactics. Women were stripped of their most basic rights, and communication streams to the outside world, like television, music, video and use of the Internet, were banned. The Taliban is now putting forth a narrative that they have evolved: claiming to be interested in forming an inclusive government, carrying a peaceful transition of power and taking into consideration women’s rights. Recent reports have already pointed to another reality, though, with stories surfacing of young girls who are being forced to marry Taliban members — which the Taliban has denied.

But Ziayee has heard these same stories first-hand. From talking to CW4WAfghan staff members and program beneficiaries in Afghanistan, she says women are feeling a shared sense of doom. “We are concerned about their safety and their lives, so we have been in touch with them. And as soon as Taliban arrived in their area, they have been so worried about being asked to hand over their daughters ages 15 and above,” she says. Many women have abandoned their homes and relocated to Kabul, in efforts to protect their daughters from becoming sex slaves, she explains. “This is the reality, these are the real stories we hear from our own connections [to] the communities.”

As for the Taliban’s recent promises to respect women’s rights, the outlook is grim. “I wish I could trust and believe them, but what they have done during 1996 and 2001 is completely against what they say now,” Ziayee says. The Taliban has stated they will support women’s rights within the framework of Sharia law, which is Islam’s legal system. But this law is up for interpretation, explains Ziayee.

“Sharia doesn’t say what the Taliban says. Sharia encourages everyone, and especially women, to be independent and to study. There is no limitation on education and work. Their interpretation of Islam is totally different, and it’s not acceptable to the majority of Afghans and Muslims,” she says.

Afghan women are most at risk right now. From the last time the Taliban left power, women in Afghanistan have built up their power: the number of Afghan women in parliament rose (with record-breaking numbers of women running for parliament), millions of girls began attending school and women returned to work. But these advancements are putting women at risk for punishment with the Taliban back in power, Ziayee warns. Anonymous reports have shown that since taking power, the Taliban has begun raiding homes and interrogating/targeting women’s rights activists and women in prominent positions, like teachers and journalists. “It’s not only about women — it’s about all people [whose] lives are at risk [because] that they cannot send their daughters to school or university,” Ziayee says. “The whole future of children is at risk. They will be an illiterate, uneducated population and have to marry soon and get into forced marriages.”

The situation is dire, but Canada can help. Ziayee says the Canadian government should use its power to put pressure on the Taliban to form an inclusive government that’s representative of women and other minority groups. It’s also essential that Canada helps implement immediate action to relocate Afghans who have worked with Canadian organizations and who are trying to seek refuge, she says. As individuals, it’s most important to stay informed and engaged with what’s going on, namely by spreading important information on social media, in efforts to hold the Taliban accountable. If possible, donate to organizations that are supporting journalists, women and civilians in Afghanistan.

“We thought we were in the middle of our fight before the Taliban [took power] — still we had issues, although we [were] progressing — but now, I would say that we have to start from scratch. We have to fight for those inside the country who will not have a voice now, and we have to be their voices. We want our Canadian sisters to stand with us and speak their voices,” says Ziayee. She emphasizes that we cannot let Afghan women disappear from public view or be forgotten during this crisis. “[Don’t] let the Taliban push them back for years behind walls and just take away their lives from them. Don’t forget them.”

There are plenty of organizations working to help those who have been directly impacted in Afghanistan. Here are a few you can donate to:

The International Committee of the Red Cross