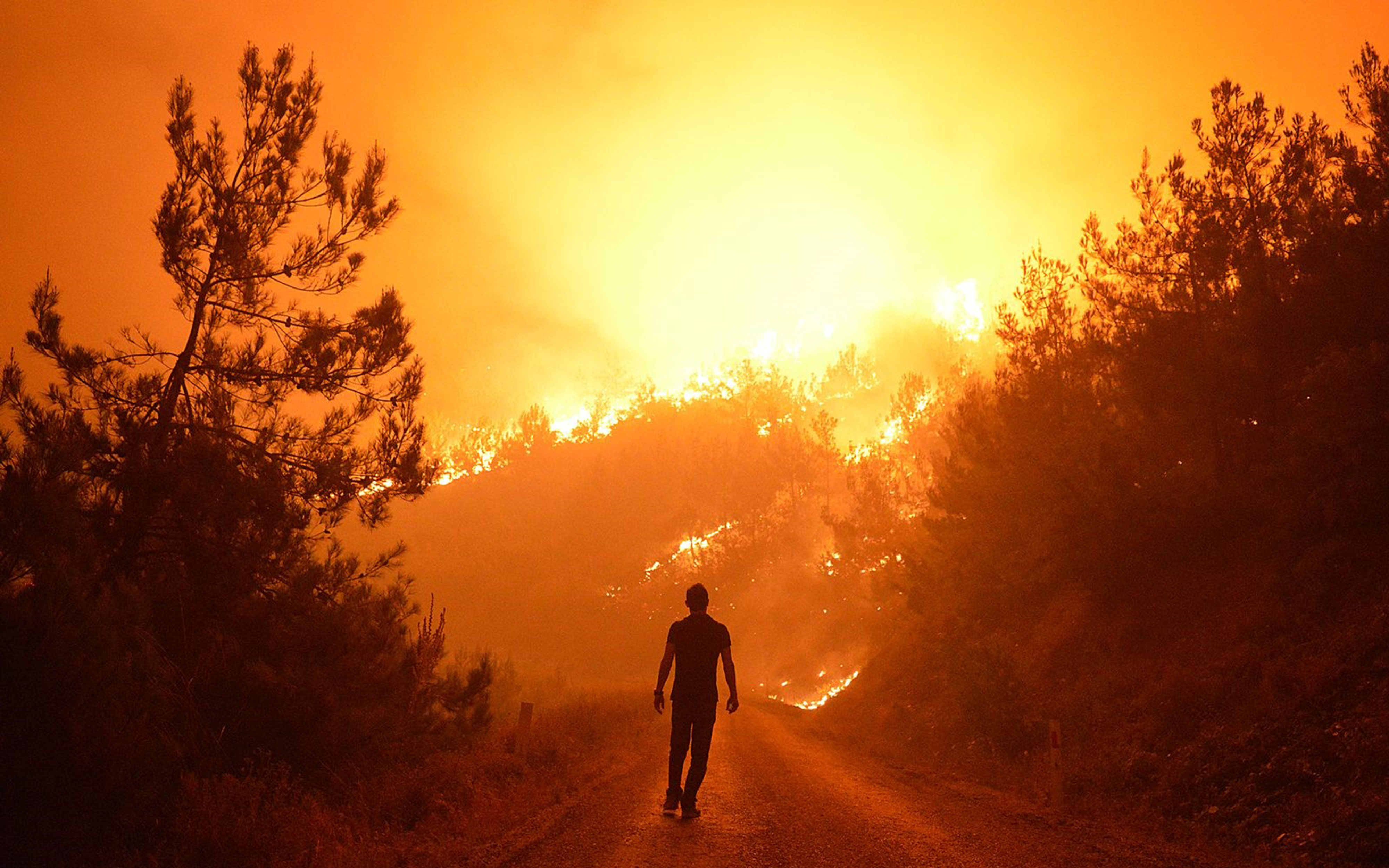 Eco-anxiety describes our persistent worries about the future of the earth and the life it sustains.

This past June brought unusually sweltering temperatures from the Pacific Northwest, creeping east to Gibbons, Alta., where Terri-Lynn Lunty resides. A sustained drought in the area had meant tight water restrictions, and a handful of rainy days brought little relief. Lunty remembers looking outside her window at her yellow yard and the fried trees in the distance. “Everything was dead,” Lunty says. She worried about her nine month old baby, whom she moved into the basement guest room with a portable air conditioner to cool down.

“As a mother, one of my biggest fears is not being able to keep my baby safe,” she says. “With the way things are progressing, I can’t guarantee he has a future. The worst part about it is I don’t really have the ability to do anything about it.”

This feeling of helplessness — and anxiety from the state of the world — can be echoed by many. With videos and news articles circulating on our feeds of incandescent red skies from burning forests, and flash floods sweeping through cities, the devastating effects of climate change are undeniably here. And with the recent release of the United Nations (UN) climate report, referred to as a “code red for humanity” by the UN secretary-general, the grief, burnout and eco-anxiety people are feeling can be debilitating.

Eco-anxiety refers to one’s persistent worries about the future of the earth and the life it sustains. Other terms such as “eco-trauma,” “ecological grief,” and “climate change distress” are used to describe similar emotions, but all relate to the relationship between our mental health and the state of the world. Taking into account the past year and a half, it seems our hurdles are set even higher: an ongoing pandemic certainly doesn’t ease our existential crises.

The UN climate report is very grim, but not completely hopeless

A report released on August 9 by the Intergovernmental Panel on Climate Change sounded the alarm on the spiralling state of global warming. The report said that humans are “unequivocally” to blame, warming the atmosphere, ocean and land in some “irreversible” instances. This year has already seen record-breaking weather extremes and it’s only predicted to get worse.

Within 20 years, the average global temperature is likely to reach or cross the 1.5 degree celsius warming threshold, unless rapid, large-scale action is taken to reduce greenhouse gas emissions. A rise of 1.5 degree celsius above pre-industrial level is generally seen as the most the earth and humanity could cope without jeopardizing human health and livelihoods.

So far, any pledges made from countries on reducing greenhouse gasses have yet to be aggressive enough to make an impact. In three months, nations have been asked to come to the UN COP26 climate conference in Glasgow, Scotland with a fresh plan to reduce emissions, mostly created by burning fossil fuels. Meeting the Paris Agreement goal — limiting global warming to well below two degrees celsius — will require sticking to a tight “carbon budget,” referring to how much additional carbon can be pumped into the atmosphere, before the 1.5 degree celsius limit is breached. These ambitions may seem out of reach, but are not impossible.

Do you have eco-anxiety?

At the U.S.-based nonprofit organization Good Grief Network (GGN), staff help people cope with their eco-anxiety and grief; people are grieving their natural habitat, sense of security and what they envisioned their future to look like, among other things. People can also have anticipatory grief, mourning a loss before it comes.

Sarah Jornsay-Silverberg, the executive director at GGN, often takes calls from people who no longer want to have children due to the state of climate change. “I have struggled with that question as well: about what motherhood means on an ever changing and very dynamic planet.”

Jornsay-Silverberg says that being able to identify your feelings can help you process them in a healthy way. “We are trying to normalize…these feelings. It’s a completely normal reaction,” she says. “It means that you’re just a beating heart on this planet who loves the natural world and [is] devastated by seeing losses in it.”

Thomas Joseph Doherty, a psychologist specializing in the environment’s effect on mental health, says it’s important to unplug from the incessant “bad news” that appears on our feeds. “And unplugging does not equate to being unaware. It does not equate to being complacent and doesn’t mean you’re giving up,” he says. When we unplug, we are able to take care of ourselves better and build our capacities, he adds. But it’s important to acknowledge that the ability to unplug comes from a place of privilege.

He says it’s also a question of what you choose to plug into: if we unplug from social media, perhaps we can plug into our relationships, what brings us joy, or our neighbourhoods. Additionally, identifying your “environmental identity,” can help you ground yourself. For example, if you live in Toronto, you might feel more connected to the lakes nearby, or if you live in Calgary, you might have an affinity to the mountains. Strengthening your connection to the places you love can help solidify your values in relation to nature. “And that’s really rich and fulfilling,” Doherty says. “When we build that identity, it makes you way more resilient.”

Maneet Bhatia, a Toronto-based psychologist, recommends channeling our energy into the causes that concern us, like getting involved with a community beach cleanup or joining a community garden program, which can give us a sense of purpose. “Part of our anxieties are from wanting to do something or wanting to feel we can help change it,” he says.

What can I do to help?

Emily Charles-Donelson, a digital campaigner for Greenpeace living in Toronto, says the onus is on everyone to tackle climate change. “When conversations come up about individual action versus mass action — to get these corporations to shift — it all matters,” she says. “Because at some point, we all need to do the work that’s going to build…a sustainable community for people and the planet.”

Charles-Donelson recommends starting in your home with things that you use frequently in your day to day. You can swap paper towels for reusable cloths (she recommends the Unpaper towel roll ) or swap your disposable razors for a long-lasting reusable one. Getting your soaps (for laundry, cleaning, dishes, shampoo/ conditioner, etc.) from refill stores, like Saponetti in Toronto, can also help reduce your plastic waste, she says.

Fast fashion is another mass contributor to climate change, and Charles-Donelson recommends buying second hand, or seeking out designers who use upcycled materials, such as Zero Waste Daniel and Copious Fashion. You can also borrow tools from a local lending library, especially for things you don’t necessarily use frequently.

According to Second Harvest, 58 percent of all food produced in Canada (35.5 million tonnes) is lost or wasted every year. Charles-Donelson recommends shopping as locally as possible, like at farmer’s markets, buying food that’s in season and cutting back on meat and dairy; having one meat-free meal a day is a great start.

For those itching to help out in their communities and contribute to larger, systemic change, connect with groups tackling food insecurity, or urge your government to invest in local, resilient food systems. Charles-Donelson draws attention to the Canada-Mercosur free trade deal in an attempt to end importing meat tied to the destruction of essential climate-cooling ecosystems.

“[And] learn about Indigenous knowledge of sustainable food systems, such as regenerative agriculture and food forests,” she says. “Advocate for these systems.”

“You won’t always feel great when you’re doing climate work, but if you can find the joy in it — and it’s there — it truly is the most rewarding, empowering, connected feeling. I wouldn’t do any other work than what I’m doing right now.”